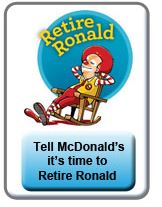 For the second year in a row I attended the McDonald’s shareholders meeting to speak about the corporation’s unethical marketing to children.  I was part of a team organized by Corporate Accountability International which included mothers, teachers and advocates.  This was the first shareholders meeting for McDonald’s new CEO Steve Easterbrook who was under pressure because of their slipping sales, protests over wages, and criticism for aggressively marketing fast food to children.  The pressure was so intense that media was banned from attending and as reported in the Guardian, McDonald’s suggestion that there would not be room to accommodate the media was “the lamest of lame excuses.”  This “lack of space” pretense rang hollow seeing that the meeting room we were in had been partitioned off with a divider.

Like last year, pictures of the Big Mac, fries and sugary drinks were front and center next to the golden arches logo reminding us that this is an unhealthy brand.  They played a video during the meeting touting BURGER$ and included two of their marketing efforts that were widely panned: “Day of Joy” and the “Signs” commercial.  It felt like McDonald’s had designed the meeting as a way to market to their shareholders instead of addressing the tough issues.   We changed that dynamic by bringing up the real challenges facing the corporation.  This is what I said:

My name is Casey Hinds, and I am here today as both a veteran and a mother. Last year at this meeting I asked for you to stop sending Ronald McDonald into schools under the guise of education. Your predecessor Don Thompson lied and told us, “We don’t put Ronald out in schools.” So this year, I came prepared with photos, like these. 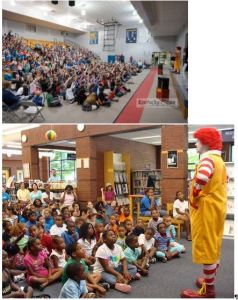 Lying to the public is the kind of disrespect that makes us see McDonald’s as the Philip Morris of fast food. It’s the kind of disrespect that results in a loss of brand trust and it’s why moms and millennials are leaving the corporation behind. Your reputation as a bad corporate actor is reflected in slipping sales and your turnaround plan addresses none of the substantial issues. You want to be seen as a “modern, progressive burger company” but progressive corporations don’t use schools as ads, or tell kids that fast food is lovin’.

CEO Easterbrook, when will you end your exploitive practice of marketing to children and retire Ronald McDonald — the Joe Camel of fast food?

In response to my question, CEO Easterbrook claimed that teachers are the ones asking McDonald’s for help which prompted teacher Charlie Feick to speak up about the importance of schools as commercial-free zones. She said:

As an educator, I know the importance of keeping marketing out of schools, — especially when the brand promoted is fueling today’s health epidemic.  More than that, it is wrong to exploit developmentally vulnerable children with sophisticated marketing that seeks to create lifelong customers.

While McDonald’s works hard to convince families that it cares about their well-being, we’ve seen how McDonald’s will stop at nothing to get in front of kids. McDonald’s exploits tight school budgets to incentivize schools to host “McTeacher’s Nights,” where teachers become brand ambassadors, and inadvertently market junk food to trusting students. While McDonald’s gets free labor and the kind of marketing money cannot buy, children and families pay the costs of diet-related disease for years to come. There’s only one word to describe this kind of exploitation of children, schools and families, and that is “egregious.”

CEO Easterbrook responded to our concerns by saying “Ronald isn’t going anywhere” which reminded me of how RJ Reynolds dug in when facing criticism over Joe Camel.