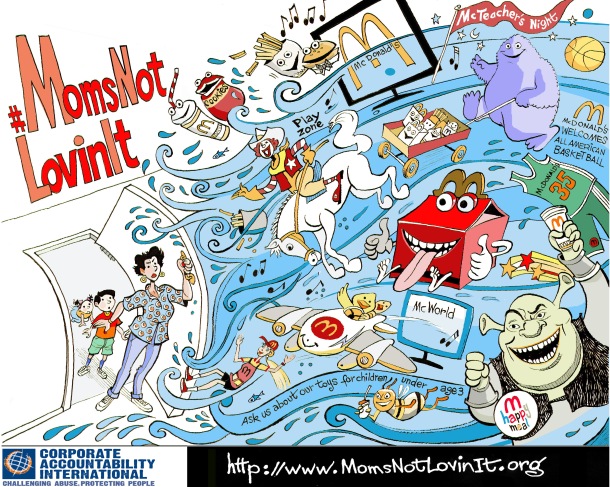 Instead of being insulted by the way that corporations are trying to co-opt them to do marketing for free, they’ll be insulted by the fact that someone objects to the campaign. They’ll side with the corporation instead of siding with their fellow moms. How’s that for coming full circle on the supportive environment?

Annie Urban made that statement in regard to Similac’s StrongMoms Empower campaign but baby formula is just the beginning.  It’s an issue that’s come up repeatedly during the eleven years I’ve spent raising children.   I’ve written about my frustration with fast food companies marketing in schools but often they are getting access via the Parent Teacher Association (PTA).   I have been yelled at by more than one PTA president for questioning this practice even though the American Academy of Pediatrics and other experts have noted that marketing to children under 8 is “inherently deceptive” and “wholly exploitive.”  A PTA president even went so far as to tell me to homeschool but parents who understand the problem with schools being used to market fast food to children shouldn’t have to resort to this.

McDonald’s is notorious for using schools as a way to market to kids.  They have paid schools to print their  logo on report cards and for allowing Ronald to pitch “health and wellness” to students.  They are sponsoring the Washington state PTA convention and putting teachers to work marketing to students.

McDonald’s calls it “McTeacher’s Night,” a fund-raiser set up by the fast-food chain that gives 20 percent of the profits for teachers who volunteer three  hours behind the counter. While they can always use extra cash for the  classroom, some Martin  Elementary School teachers believe it’s degrading for them and unhealthy for  the kids, who are encouraged to bring their families to dine at the  Golden Arches.

“We will be endorsing a product that contributes to the epidemic of childhood obesity and heart disease, even though the state dictates that we teach students to avoid junk food,” said first-grade teacher Rebecca  Coolidge.

In Kentucky, a state with the third highest rate of childhood obesity, McTeacher’s Night also has cookies.

“the kids wanted to see their teachers,” who were working the cash registers, baking in the kitchen and selling cookies through the drive-thru. Principal Shane Lakes could be seen on the front line taking orders and making change.

Instead of siding with corporations, let’s side with other moms who are trying to shield their children from the flood of McDonald’s marketing.  We are uniting this Mother’s Day to let CEO Don Thompson know we’re not “lovin’ it” and want him to stop the company’s predatory marketing to our kids.  For more ways to limit your child’s exposure to McDonald’s marketing, visit www.MomsNotLovinIt.org

3 thoughts on “Moms or McDonald’s: Which Side Are You On?”